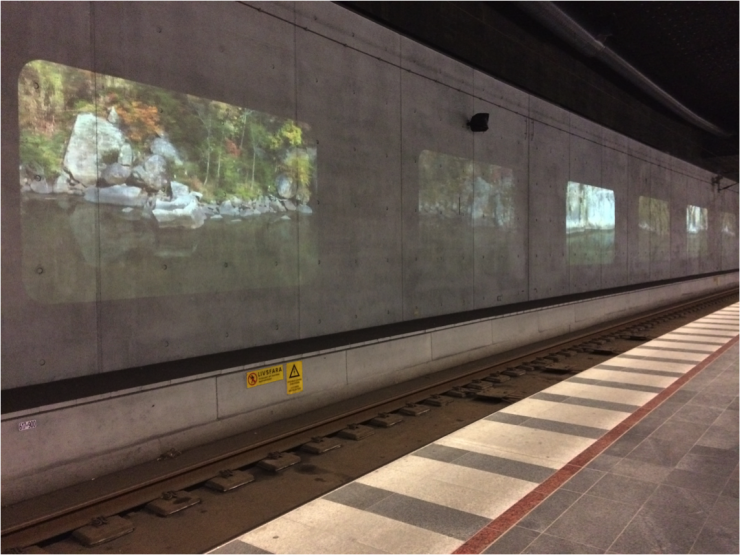 I start out with a very narrow definition of my field of interest in this case – the projection based video art in public space, more specifically in public train station buildings.

At the starting point of my research this was partly because of the huge amount of video artworks out there. But what will hopefully become evident during this presentation, the seemingly simple technique of projecting something onto a public surface of some kind might prove quite relevant to the experience of time in relation to the artworks.

So, what can projection based video art do in public space? What are their artistic potentials?

My answer to this question is, that they create what I call “time travel spaces” meaning specific sight perceptions and senses of time. As such, time travel spaces have quite a long history. They take their departure from the time-space compression that began with the Industrialisation and have evolved in relation to historically and technologically conditioned sight perceptions including train travel, the panorama, and the diorama.

The intersection of technology and human perception has been noticed for a long time, for example by Walter Benjamin, who states that what he terms the collective perception is quite capable of change, and is in fact changed or even conditioned by technological developments happening at specific historical times. New technologies can create new perceptions, which is of crucial importance to the studies of visual culture and specific visual phenomena, because these might have a part to play in the basic historical changes of the human perception.

The train and train travel have functioned as a condensed starting point for much film theory, urban and modernity studies but also as one example of the time-space compression initiated by the Industrialisation. David Harvey has argued that since the 1970’s we have seen a further acceleration of this tendency by which we can now see the transforming and disorientating influences on everything from political-economic practices to social life. The time-space compression covers not only the way in which the distances of the world have grown significantly small due to developments in transport and telecommunication, but also taps into a general acceleration of society and the way we live our lives.

The train travel functions as a way for us to analyse, how the compression of time and space influences our perception and our experience of time and space in the travel experience. The train travel is a specific form of travel experience that no longer consists of a spatial or temporal continuum, and especially Christa Blümlinger has argued, that the cinema and the train are quite alike in the way, that they both function as machines, that organizes our gaze and creates an experience of one forward moving trail or path.

The panorama was patented as a visual medium by Robert Barker in 1787 with the description “Apparatus for Exhibiting Pictures”. The panoramas were usually based on landscape painting or representations of historical events that were shown from the inside of a round, cylinder formed room or building. As a viewer you were “inside” the picture, which created an immersive 360 degree sight experience of a scene or a world view.

The diorama was invented by Louis Daguerre and Charles Marie Bouton and was shown for the first time in Paris in 1822. They were made by partly transparent material that was painted on both sides, so that when lighted from either the front or the back, a different scene would appear. In this way, it was possible to create the illusion of movement, which was used to simulate before and after a historical battle, or a slow transformation from daylight to night-time. Often several dioramas would be shown in one show, which was possible due to specially constructed buildings where the entire viewing area could be moved.

Both the panorama and the diorama aim at transporting the viewer, both spatially and temporally, even if only virtually. In this way, they functioned as substitutes for the travel itself. As popular mass mediums and travel representations they functioned as surrogate reality and as models for the experience of reality. 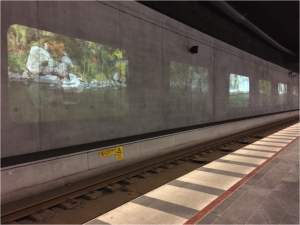 One of the artworks that I have been researching is the permanent installation on Malmö Central Station named Elsewhere. What first struck me about this artwork is the very literal site specificity of it – how the travel perception is both the theme and the “result” of it. Elsewhere is a commission piece made out of forty-four huge projected picture squares with sort of rounded edges that mimics the windows in a train or other vehicles. The squares are placed in different spots on the station, but typically with several of them in a row to create the feeling of an interlinked movement of images between them.

What is shown on the picture squares is one long image strip that has been made from twelve hundred movie clips that are stitched together. The clips have been filmed all over the world from boats, trains, busses and cars – all horizontally moving. The image strip is programmed in a way, so that the order of the clips is always random. The image strip is shown with a few seconds of break between each picture square, as if something happens “between” the image squares, exactly like when you look out the train window and suddenly miss some important detail or can no longer follow the focus of your attention due to the framedness of the window and the temporal speed of the train.

This way Elsewhere creates the feeling of already being inside a train before actually entering one, and the train station becomes a train itself.

Elsewhere creates an experience of seeing the world in a slightly different way than the everyday like. It functions as a temporal operation and I argue, that it is capable of producing a space by expanding the place. It can be understood in relation to modernistic travel sight perceptions including the panorama and the diorama, and as such travel sight perception, Elsewhere facilitates a specific type of gaze, perception and sense of time, created in the interlinked space between the artwork and the viewer.

To analyse this interlinked space, our first stop should be to look at how Elsewhere functions as a representation of travel and of time. How does the artwork invoke time in a way that affects how the viewer’s experience is organized?

Anne Friedberg argues, that the panorama and the diorama evoked the time in a way that mobilized and virtualized the gaze to simulate the travel. This mobilization and virtualization of the gaze was continued with the cinema, and it might be of continued interest today given the recent 2nd rise of virtual reality.

The intersection of technology and human perception is underlined, when we look at the differences in the types of mobilization and virtualization in different categories of historically conditioned media from the panorama, diorama, to photography, cinema and the video art projections. Even though several of them create what I termed time travel spaces, they do not do so in the same way; they do not create the exact same type of gaze, perception and sense of time.

In regard to Elsewhere, the montage functions as a visual sign for the represented time of the work. The artwork creates a travel to “everywhere”, and relates to the time-space compression by asking: “Where do we not travel to?” It parallels different and even sometimes contrasting time- and space worlds in the same form, so that by only one gaze it is possible to travel all around the world in one dioramic sight experience.

(…) first, time-consciousness must be said to incorporate microphysical registrations that have no direct perceptual correlate but that underlie the emergence of the perception of time (…) and second, the now itself must be accorded a lived quality that makes it more than a mere point or temporal location (…) and indeed, more like a space in which we dwell, “a space within time itself.” – Mark B.N. Hansen, New Philosophy for New Media, p. 252

But, if we wish to move beyond looking at artworks as “representations” and beyond visuality as resulting only from the human gaze looking at “something”, we need to redirect the attention to the body as a whole.

According to Mark B.N. Hansen, visuality is first and foremost bodily constituted and therefore in no way abstract. Following Bergson, he insists, that the body functions as an active framework for the image even in our contemporary digital regime. In this way, there cannot be said to exist any information or images without the human body’s formgiving and frame working potential. The affectivity and pre-discursiveness of the body functions as an active starting point for meaning production, which gives technology a radical potential, if we believe in Hansen when he says, that technology is capable of affecting our senses on a pre-cognitive level way before perception and language.

This is a way of explaining how the changes of the collective perception, as Benjamin termed it, is actually happening. But what is the change of our time? Hansen argues, that contemporary media art function as a catalyst for a reconfiguration of the perception and a shift from a perception model based solely on vision to a model based on the entire body.

Therefore, we need to rethink what we understand as a visual experience, because sight can never be separated from the rest of the body. The time travel space, I argue, is a visual experience that is about seeing time, sensing time but also about thinking time. But thinking time in this context is actually bodily constituted. Our time-consciousness, according to Hansen, incorporates microphysical registrations, which may or may not originate in technology. When our time-consciousness is affected, possibilities arise for new and different kind of “nows” and the “now” might be expanded into a space for us to dwell within time itself. Time, or at least time consciousness, can therefore be seen as not exclusively human, because the affectivity and the microphysical registrations are not.

The changes of our collective perception at different historical times can in this way be viewed from a far more ground breaking point of view: when technologies change our perception, they are also changing time itself. This means, that we can go back and analyse modernistic viewing experiences as the panorama and the diorama anew, or we can move forward and perhaps begin to grasp what kind of changes virtual reality might actually bring about in the next ten or twenty years.

What started as a project for analysing video projection art works turned out to be the groundwork for a broader methodology and rethinking of visuality and how to make research within a visual culture field that becomes increasingly virtual.

The key is how we deal with time and space, and I think this is especially relevant in the very elaborate world buildings of recent VR artworks today.

Blümlinger, Christa: “Lumière, the Train and the Avant-Garde” in: Strauven, Wanda (ed.) The Cinema of Attractions Reloaded. Amsterdam University Press, 2006.

Friedberg, Anne. The Virtual Window – From Alberti to Microsoft. The MIT Press, 2006.

Harvey, David. The Condition of Postmodernity: An Enquiry into the Origins of Cultural Change. Cambridge, MA: Blackwell, 1990.